In addition to Ken Waldman's careful scavenging of tunes from his first three CDs, Beth Chrisman contributed two tracks of her Fairbanks-raised vocals.

The tunes: Walking in the Parlor; Rock the Cradle, Lucy; Texas; Cruel Willie
(that's one of Beth's songs); Coming Home with the Girls in the Morning;
Shove that Pig's Foot a Little Further into the Fire; Don't Treat Me Too Nice
(the second of Beth's songs); Forked Deer; Bobtail Mule; then the four big
party tracks that take you to the parties described in the opening section
and to the Alaska Folk Festival jams also described in the book: Fly Around
My Pretty Little Miss, Sandy Boys, Elzic's Farewell, Rockingham Cindy;
then Ken Waldman reads the book's first couple of  pages followed by Ken
playing his original tune, Fairbanks Cabin Waltz, solo on mandolin. Final
track? The Burnt Down House reprise from Ken's second CD, the one titled
Burnt Down House. It's the ideal finisher for this CD project.

The June 1 date above means Cyberwit.net has officially published Ken Waldman's novel, Now Entering Alaska Time. Below is Ken's introduction to the novel, and scroll down further to see the front and back cover of the book (and here's the link to Ken's late 2021 Kickstarter campaign where you can read much more about the project).

Also, Ken and Cyberwit.net have sent out copies, and they await reviews. For now what they have are responses from early readers. Check them out (and now on the very top, a few lines from a review received on July 1, plus a link right here to that complete review; below that, some lines from another review, one received in early June--and the whole review is pasted in on the very bottom of this page).

"Waldman is able to take everyday things that make us human and show us a
long view of Alaska life. The characters are remarkable. I didn't want to put this
book down! And now, I'm definitely going to have to visit Alaska." --LB Sedlacek,
Pegasus Literary Review

"This has moments that take me to the reading of Another Roadside Attraction,
One Flew Over the Cuckoo's Nest, Bound for Glory, or Call of the Wild . . .
Storytellers, musicians, travelers, those loving tall tales, stories, the road, and
turns at every corner will find an inviting home in Ken Waldman's writing."
--Ancient Victorys, Bonney Lake WA, summer 2022 issue

"I just wanted to let you know that I finished the novel yesterday! It was quite enjoyable!
I actually got more attached to Zan and the other characters than I expected I would,
which is a great sign for character development. I liked how it was very very Alaska specific,
even more than I thought it would be. Meaning you didn't really explain anything; it's like
you assumed anyone reading the book would be from there or have spent significant time
there. Which was a really nice way to revisit." --Gabriela, Vancouver, BC, CANADA

I really liked your novel. I didn't know what to expect, and it blew me away."
--Jeff, Skagway Alaska (bookstore owner who ordered 20 copies)

"Couldn't put it down!! just finished it... Great book.  I looked on Google Earth to see the
communities mentioned. Yikes... They are Way out there, aren't they!!" --Lee, Bloomington IN

“By novel's end, I'd become quite involved with characters, and with the landscape you
describe. The novel portrays a believable world, a world found by those, like yourself, who
ventured to far-flung Alaska in their youth in a previous time. Thank you for the story.”
--Rachael, Breaux Bridge LA

“I just finished reading the novel - a good read. I feel/know more of Alaska than I ever have -
thanks, and love the writing about music. And some characters who will stick in my
thoughts. So, thanks.” --Jim, Lytle TX

“I've meant to write for some time after devouring your novel. I loved it! I can hardly believe I
left Alaska 34 years ago, nearly half my lifetime. Nome and Fairbanks memories flooded
back, and your characters were/are people I want to meet.” --Donald, Moscow ID

“Can I have permission to make a screenplay out of this?” --Rachel, Salt Lake City UT

“Finally got around to reading, finishing Now Entering Alaska Time. Congrats on finally
getting a great book published. Also, it makes me never want to go to Nome.” --Dan,
Portland OR

“Just a quick note to say I finished reading your fine novel. It really brought me back to
the Alaska I once knew. I recognized everyone! And I could almost smell Nome. I
especially liked what you did with the two main characters, as they fumbled toward what
might become a stable relationship in a wildly unstable place. You've got Alaska's number.”
--Parker, Olympia WA

Besides Skaguay News Depot & Books, the new book is available at The Bookstore in Haines, Hearthside Books in Juneau, Title Wave Books in Anchorage, Writer's Block Bookstore & Cafe in Anchorage, Fireside Books in Palmer, the Talkeetna Museum, the Homer Bookstore, River City Books in Soldotna, The Library Gift Shop in Hope, and Karibu Gallery & Gifts by Denali National Park. It's also available at several Alaska libraries and the Grand County Library in Moab. Utah, which means any library anywhere can order it through interlibrary loan. And of course you can reach out directly to Ken Waldman. He has copies and is happy to mail books to anyone anywhere. By August 1 he expects to have a new CD to go with the book.

Welcome to my twentieth book: sixteen full-length poetry collections, a memoir, a kids' book, a creative writing manual, and now this novel. So it's no wonder that people who know me as a writer think of me as a poet. But in 1985 I arrived in Fairbanks to enter the MFA program as a fiction writer, and I graduated in 1988 as a fiction writer who'd begun writing poems.

Winter 1989 I was living in Juneau and making smart progress on a collection of stories I'd worked on throughout grad school. One new story, set in Fairbanks, got away from me. What I thought might be a fifteen or twenty-pager about a young man, Zan, turned into “Potluck,” the opening section here. I remember writing the eighty pages in a three-or-four-day blur. Twenty pages in, when I'd hoped to end it, I'd barely gotten started.

For months I congratulated myself; I'd written a novella. But a year later in Sitka where I was a visiting assistant professor at a branch campus of the university, having at last completed the story collection, I realized the novella was not just an outlier, but the start of a novel. At that point I began writing the second section set in Juneau with a female character, Melinda.

1990-1992, then tenure-track at another branch campus, this time Nome, I taught five classes a semester, and wrote more poems, though weekends I might sporadically add to that second section. Then I got sick. Mysterious debilitating joint pains necessitated a leave of absence and eventual resignation from the Nome job, and put the novel on hold.

Seeking healers, I journeyed from Nome to Seattle to New York City to Prescott, Arizona, then back to Seattle. Late 1994, still convalescing, running through savings from three years of teaching, I finished a draft of that second section, “December 21, Juneau,” and moved back to Juneau where I thought I'd quickly finish the novel.

But no. For months I moved between sublets as I picked up a few jobs teaching and performing. Sometime that year I managed to squeeze out the third section, “When in Nome.” March 1996, not long after I'd finally found stable housing, and felt as if the illness time was perhaps fully behind me, I survived a plane crash while working in rural Alaska. Bloodied and concussed, I was lucky to be alive. The novel waited.

Spring 1997 I wrote both the fourth section, “Nome Winter,” and the coda, “The Alaska Spring,” and immediately set about querying agents. A few asked to see fifty or a hundred pages. A handful requested the complete manuscript. One agent held on to the manuscript for a year, regretfully declining, writing that though she liked it, she didn't know how she could sell it.

I queried more agents, queried editors, and also attended various writing conferences. At one, in 1996, six weeks after my plane crash, a serendipitous meeting with a publisher began a process that led to my first two poetry collections in 2000 and 2002. By then I'd also had several hundred poems and a dozen short stories published, and was occasionally performing not just in Alaska, but throughout the Pacific Northwest. But that's running ahead of myself.

November 1999 I was working for several days in Interior Alaska schools with music partner, Andrea Cooper, a Canadian banjo player and flute player. She'd flown in, her first time in the state, and wanted to read a contemporary Alaska-set novel. Back then there were a few mysteries set in Alaska, and some good nonfiction, but little literary fiction. I offered her Now Entering Alaska Time, that is if she didn't mind 300+ typewritten pages. She told me she'd try it, and read it in the evenings after our days in the schools. The end of the week, I asked how she liked it. Her response, “What is it with your country you can't get this published?”

That was twenty-two years ago. Around that time, an intern at a major publishing house responded to a query and asked me to send the manuscript. A few weeks later she wrote that while she really enjoyed it, she couldn't recommend it because the publisher was interested in real literature, not popular fiction. I shrugged. Other agents and editors who'd taken time to respond personally had said that despite the strong writing, they couldn't see a market for this. It didn't seem to matter that I was already going around doing events and that because string-band music was featured in the book, I could make an accompanying CD.

Since then I've kept busy with the touring and a myriad of other projects. In 2001 I drove out of Anchorage, where I was then living, and I've been driving around doing jobs ever since. Occasionally I'd submit the novel to a university publisher, a small press, or a contest. When told by one university press that the length was prohibitive, I shaved 5,000 words, then 2,000 words, then another 6,000, ultimately cutting almost an eighth of the book. Still too long, they said.

After initially finishing Now Entering Alaska Time, I envisioned it as the first of a trilogy. Now, thirty-two years after starting it, twenty-four years after “finishing,” it's become a period piece. If I'd have to self-publish, eventually I would; I knew the book was worthy. But I also knew it only took a single editor or publisher. Every few years I'd take it out again to revise.

Fall 2020, Dr. Karunesh Kumar Agarwal, from Cyberwit.net in India contacted me about potentially publishing a book of poetry. Satisfied with that book, Leftovers and Gravy, and our working relationship, in summer 2021 he reached out about publishing a second book. It somehow seems exactly right that Now Entering Alaska Time has found this particular publisher at this particular time. India? Sure!

I'm excited this novel has finally found a home. 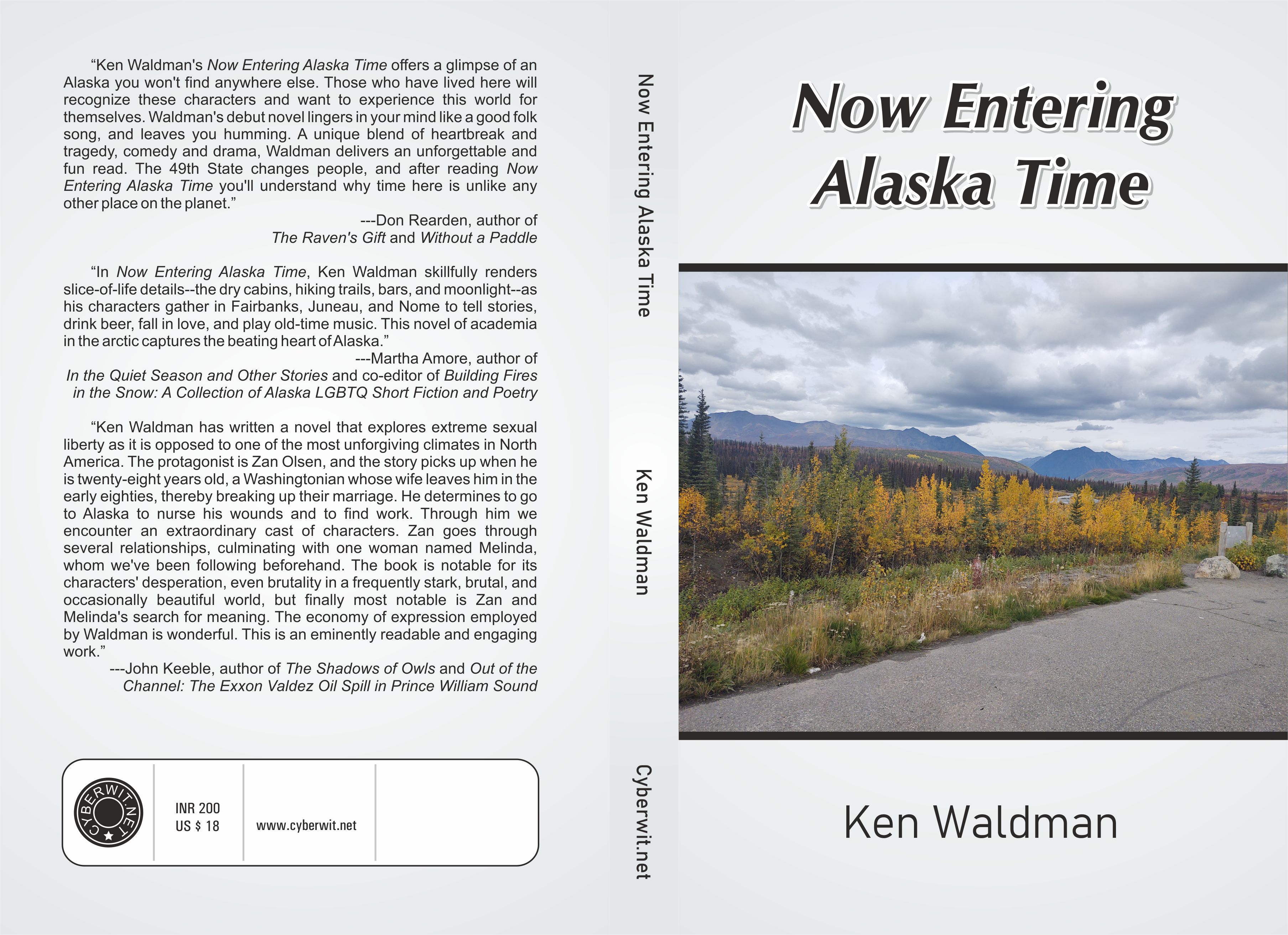 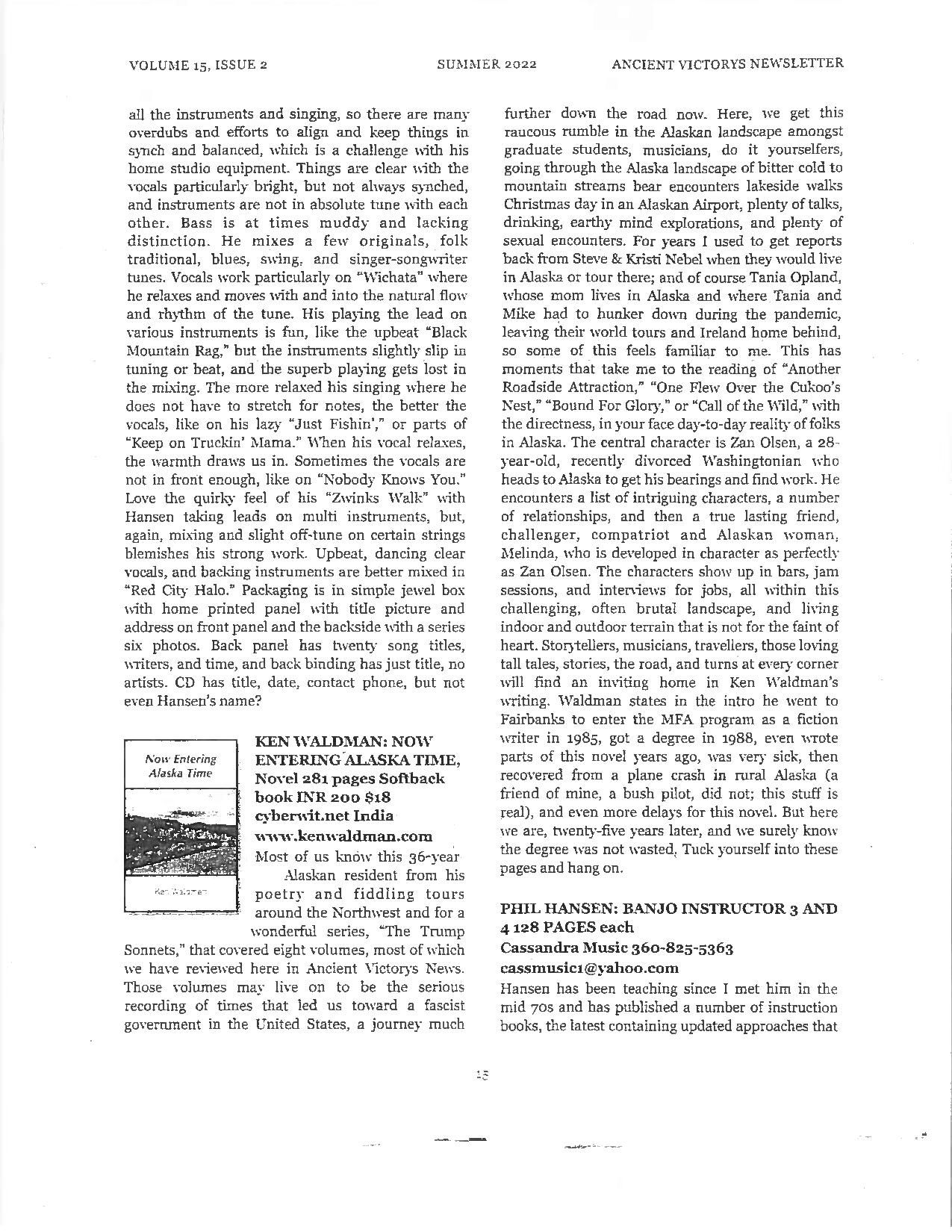